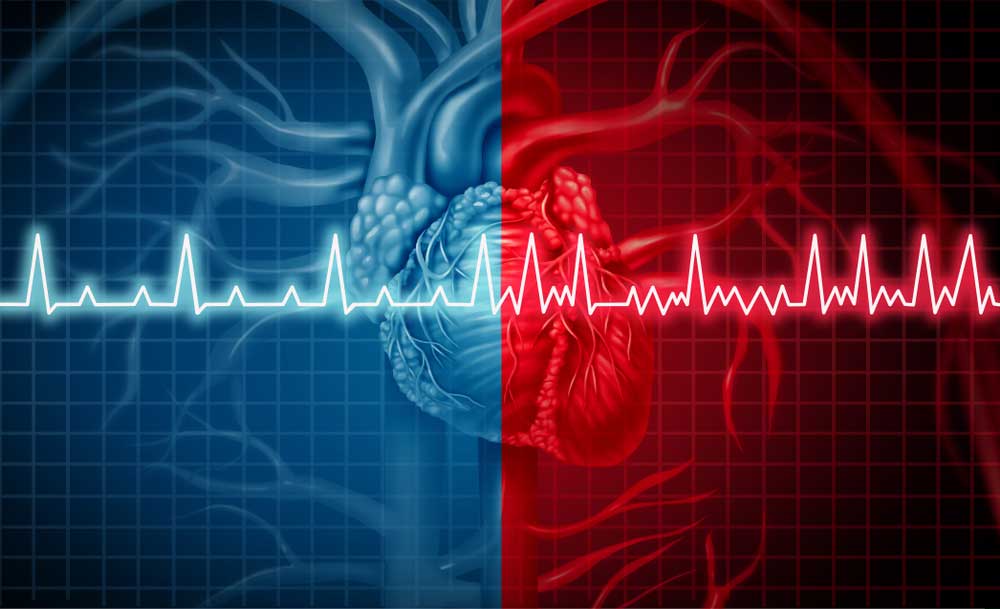 ENCORE · This Article Contains No Fibs About AFib

The familiar wub-dub of the heart accompanies us throughout our lives, providing a gentle beat that keeps us alive. But for some of us, the beat might not be so steady. For 33 million people worldwide, the heartbeat lacks a rhythm at all. It sounds like shoes in a clothes dryer and gets progressively worse. This is called Atrial Fibrillation, or AFib for short. The risks of AFib increase with age, and there is a genetic component as well. Other risk factors include:

In order for AFib to occur, doctors believe there needs to be a trigger and a substrate. A trigger, or driver, is the electric signal that travels to the heart and initiates an arrhythmic event. This can be from several areas, but is frequently from one of the big pulmonary veins that carry oxygen to the heart. A substrate is the underlying condition that makes a sustained event possible and could be structural or electrical. Common substrates include the electrical system of the heart, dilation (or stretching) of the atrium, cellular-molecular changes, and/or an increase in disruptive cells called fibroblasts. In general, many or all of these changes would occur, leading to constant AFib.

AFib is very dangerous. Other than a wonky pulse, there are three major complications: heart failure, stroke, and myocardial infarction (a heart attack). Heart failure is when the heart can’t pump enough blood, while stroke and myocardial infarction can be caused by stray blood clots. Heart failure is both a risk and a symptom, which illustrates one way in which AFib is a progressive disease. Through complicated electric and biocellular mechanisms, long term AFib seems to cause more AFib.

Treating AFib has proven difficult. It is effective to treat the underlying risk factors, such as obesity and diabetes, but this is difficult and the actual cause of AFib isn’t always clear. Controlling the rhythm of the heart is also tough and risky, as messing with heart rhythm can easily lead to big problems. Atrial fibrillation ablation is an effective treatment. It is an intensive surgical procedure where doctors scar problem areas to reduce electrical activity. Even with this method, the risk of resurgence is over 30% after 5 years.

Two of the biggest complications of AFib are related to blood clots. Because of this – and the difficulty of other treatments – major pharmaceuticals often target thromboembolisms, or clots. The clotting system itself is very complicated. A simple version is that platelets activate and produce several enzymes. These enzymes make thrombin, which makes a big mesh-like protein called fibrin. This would be a slow process, except that thrombin also activates amplifier enzymes, which makes this process very fast. The fibrin then catches red blood cells and blocks wounds – or blood vessels. When these clots travel to the brain they can cause a stroke. When they restrict blood flow to the heart they can cause a myocardial infarction – a heart attack.

Doctors are investigating new classes of medications which do not depend on vitamin K. These are called Non-vitamin K oral anticoagulants (NOACs) and some target the amplification pathway of clotting instead. There are  currently four FDA-approved NOAC drugs on the market; dabigatran (Pradaxa), rivaroxaban (Xarelto), apixaban (Eliquis), and edoxaban (Savaysa). Thrombin and fibrin still get produced and some clotting can occur, but the rapid amplification is shut down. The hope is that this can allow the body to repair trauma and stop external bleeds without building internal clots from AFib. With your help and participation in clinical trials, we can push science without pushing clots.

Vann, M. R. (May 10, 2013) The Sound of an Afib Heartbeat. Everyday Health. https://www.everydayhealth.com/heart-health/sound-of-afib-heartbeat.aspx