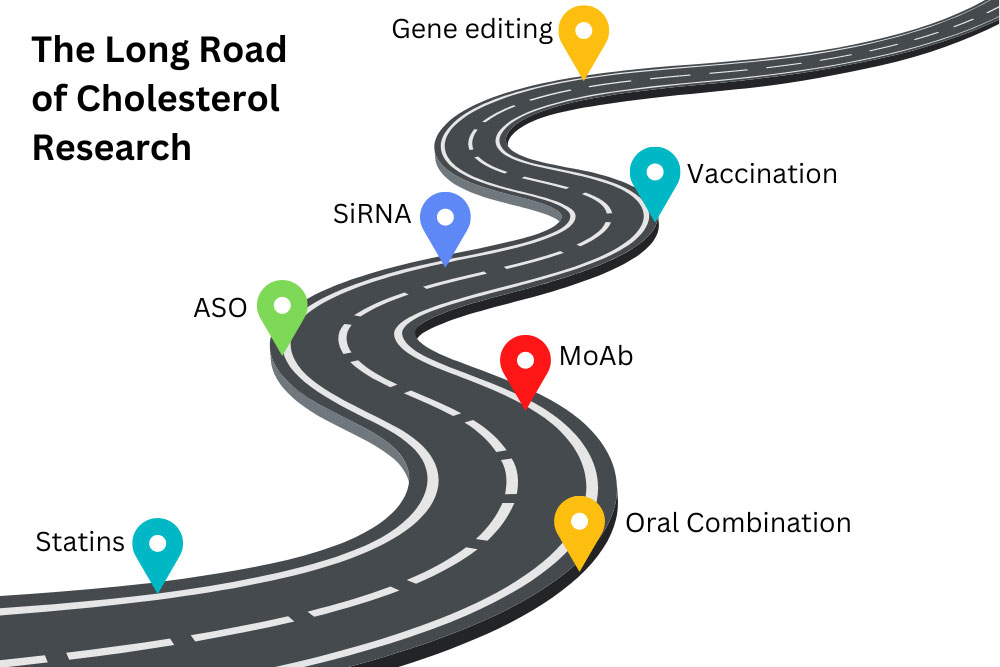 Most of us have heard of cholesterol, but what is it? Why is having too much cholesterol a bad thing? How do we get cholesterol in our bodies? What can you do to lower your cholesterol to healthy levels?

Cholesterols are a broad and useful type of fat found in the body. The body needs them to create hormones, essential vitamins (like vitamin D), and other molecules. They float on the surface of our cells, helping to maintain the structure and function of cell barriers. Cholesterols regulate cell activity and act outside of cells. They insulate the neurons in our brain, allowing us to think.  In fact, cholesterol is so important to daily function, that every cell in the body can make cholesterol from basic materials, except your eyelashes!

There are times when cholesterol is downright bad. LDL cholesterol and Lipoprotein a [Lp(a)] have some particularly sticky portions that can get stuck to the inside of our bloodstream. We call one of these portions ApoB. Sticky cholesterol obstructs blood flow in the form of plaques. Without help, this leads to atherosclerosis, scarring, and hardening of the arteries. Atherosclerosis further cascades into cardiovascular disease, clots, heart attacks, and stroke. This is very bad. Unfortunately, it is also very common; atherosclerosis in the neck is found in ¼ of people worldwide. Lowering excess cholesterol is a global health concern.

Our liver creates enough cholesterol to supply our bodies. We are also able to absorb cholesterol from our diets and make some in other cells. The most effective methods of reducing cholesterol are lifestyle and diet changes. However, for some people, diet and exercise don’t seem to budge their cholesterol numbers at all. For others, the ability to exercise and dietary restrictions may be limited. This is where medications can step in.

To understand how a medication may reduce LDL and/or Lp(a), we need to learn a bit about how the body makes things from DNA. Genes are bits of DNA that contain the blueprint for a protein. Genes provide the blueprint to messenger RNA (mRNA). The mRNA translates genetic code into proteins. The cells then fold proteins into complicated, machine-like shapes. Proteins interact with molecules and other proteins to create all sorts of things for the body – including cholesterol. Clinical research has been expanding which of these steps we can target for medications.

Statins are the first line treatment for reducing cholesterol. They target hydroxymethylglutaryl coenzyme A (HMG-CoA). HMG-CoA is a protein used to construct cholesterol molecules. Reducing HMG-CoA slows the body’s ability to create cholesterol, lowering cholesterol levels. Statins block the production of the “bad” LDL-C cholesterol and lower levels by as much as 60%. The benefits for statins to reduce cardiovascular events have been proven in multiple clinical trials over a diverse patient population.

Other oral medications, including ezetimibe and bempedoic acid, can be taken with statins. Ezetimibe can lower LDL-C levels by approximately 20% by inhibiting cholesterol absorption in the intestines, making it a useful add-on medication when statins alone are insufficient. Bempedoic acid can lower LDL-C by 15-25% by decreasing cholesterol synthesis in the liver.  Because bempedoic acid is converted to an enzyme found only in the liver and not the muscles (like statins), it is often an alternative for patients who have statin-associated muscle myalgias.

Monoclonal antibodies (MoAbs) are a newer class of medication. MoAbs like alirocumab and evolocumab act like signaling molecules. These two stay outside of cells and tell the liver to produce less of the protein PCSK9. Controlling PCSK9 is a newer method of changing a person’s cholesterol profile. PCSK9 controls how much extra LDL cholesterol is absorbed and recycled by cells. MoAb medications affect this by targeting signaling receptors on the outside of the liver.

Even newer medications target the process by which genes get turned on inside the cells.  They are called gene silencing therapies because they aim to “silence” the gene’s effects.  Antisense oligonucleotides (ASOs) and small interfering RNA (siRNA) stop the liver from producing functional LDL or Lp(a) mRNA molecules. These act at different, very early stages of the cholesterol process. In addition, specialized packaging on the medications deliver them to the liver and not other cells. This can make for very targeted medications that (hopefully) have fewer side effects.

Inclisiran is the first FDA-approved siRNA therapy to lower LDL cholesterol.  It is a subcutaneous injection taken twice a year.  Imagine going to your physician’s office just twice a year to get your “cholesterol vaccine”!

Even more amazing, gene editing tools such as CRISPR could reduce overexpression of PCSK9 or other genes on a long-term basis. These are still in early phase trials, but the future is looking bright.

Lipoprotein a,or “L-P-little-a”,  or Lp(a), is a new target for decreasing the risk of cardiovascular disease. Lp(a) is genetically inherited and increases the risk for both heart disease and stroke because it can promote plaque buildup, blood clots, and inflammation.  New gene silencing therapies are in clinical trials right now using both ASO and siRNA technology.

Diet, lifestyle changes, and statins remain the front-line defense against high cholesterol. New medicines may work with or replace these classical defenses. As technologies move through the clinical research apparatus, we may be able to tailor custom combinations of medications for individual patients. ENCORE Research Group has been involved in every step along this path, helping to study medications in every category. Join our team and help pave the way for new medications to help combat high cholesterol!