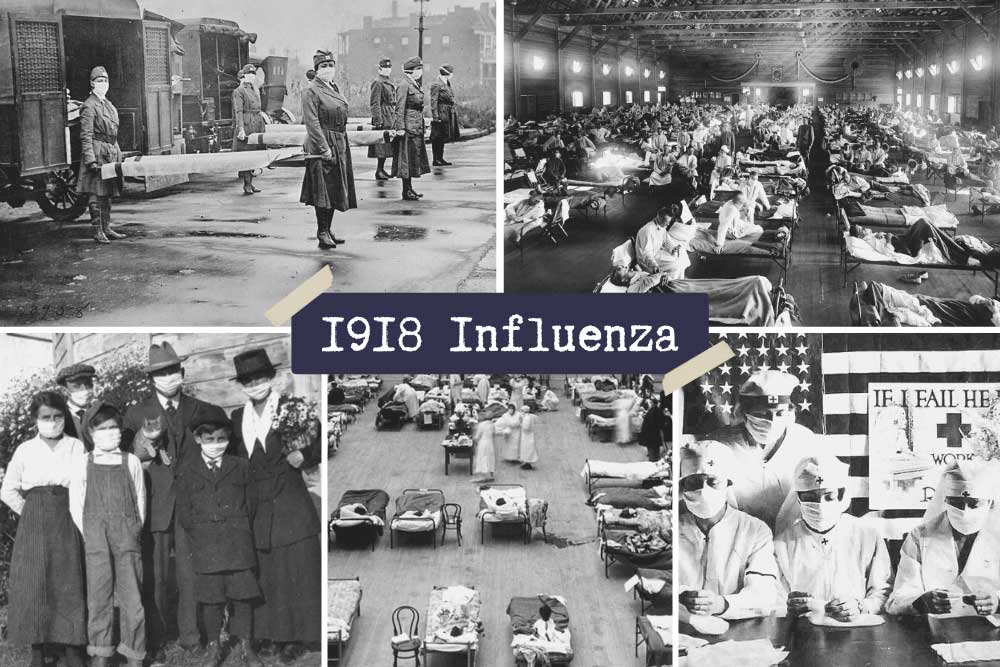 A pandemic spread around the planet in the first quarter of the century. Not this century, however, but the last. The 1918 Flu Pandemic was the largest and deadliest outbreak of disease since the bubonic plague in the 1300s. The first official reported case was in Kansas in 1918. This gives the disease its proper name, the 1918 Influenza Pandemic. A much more common name, however, is the Spanish Flu.

The name Spanish Flu is an unfair name. Spain lost around a quarter million people to the 1918 Influenza. This is less than half as many as the USA, and fewer than Afghanistan, Mexico, Russia, Italy, and Japan. On top of that, India lost somewhere above 18 million people, and China between four and nine million. The big difference in losses was due to Spain being neutral during World War I. Because of this, they weren’t shy about publishing accurate data. Spain was the first country to publicly disclose that the pandemic was real, and other countries underreported or lied about numbers for years. This may strike some as familiar; during the COVID-19 pandemic, several national and local governments around the world tried to downplay the severity of COVID for political gain.

But what is influenza? Influenza, known as the flu, is very similar to COVID-19 in many ways. It is a viral infection, and its primary symptoms are cough, fever, joint pain, headache, body aches, and others. However, more serious complications such as pneumonia, liver damage, or brain problems can be triggered by influenza. It spreads through the air and can survive in water. Soap, changes in pH, and heat can destroy the influenza virus. The most dangerous part of influenza is how variable it is.

The influenza virus has several subtypes, and each of these mutates constantly.  This makes it hard for the immune system to detect and fight new forms of the virus. It also means the specific symptoms of infections can change. In the 1918 influenza pandemic, the strain of influenza was particularly deadly for young, healthy people. This resulted in a lot of excess deaths compared to other strains.

The 1918 Influenza Pandemic was made much worse because of World War I. The war resulted in overcrowded barracks, troops stuffed in ships, and people crowding in shelters. Additionally, it spread wide and far as governments deployed troops around the world. A lack of accurate reporting and proactive measures certainly didn’t help. The biggest difference between then and now was medicine.

1918 was over a hundred years ago, but in the realm of medicine, it may as well have been much longer. Viruses were only discovered around 20 years prior, and there were no effective ways to fight them. There were no antiviral medications. For patients that developed pneumonia, there were no ventilators and no antibiotics. On top of this, there was no influenza vaccine.

The “Spanish flu” of 1918 helped refocus medical attention around pandemics – particularly influenza. In the early 1930s new vaccines were being developed from chicken eggs, and less than ten years later, the first experimental influenza vaccines were developed. Today, our yearly flu shots come from a direct line of response from the 1918 influenza pandemic. A century later, we have come a long way with medical advances, and since we know the influenza virus mutates regularly, the best way to help continue the fight against it is to participate in a clinical trial for the latest flu vaccines.

MedEvidence Radio is a monthly live broadcast from WSOS 103.9 FM / 1170 AM with Kevin Geddings and Dr. Michael Koren from St. Augustine, Florida. This month’s MedEvidence Radio discusses all the various viruses coming our way this season.

We will dive into:

Prefer to listen to the podcast without video? You can do that below!

Prefer to listen to the podcast without video? You can do that below!